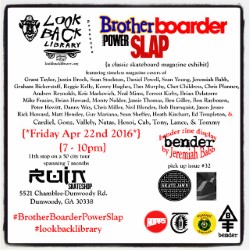 ...Kevin Marks is the dude that ran Overboard Enterprise. Which, if you were an avid skater in the Atlanta area in the late 90's through late 00's, and were a skate video nerd, you were a big fan of. If you loved the fact that Ruin was the only shop in a 100 mile radius that was not only familiar with, but stocked product and videos from Blueprint, Cliche and hard to find, pre-internet, underground skate companies, you were a big fan of. If you ever had a camouflage Blueprint heart hat or wondered how Ruin had Puzzle VM, you were looking at the influence of Overboard Enterprise and Mr. Kevin Marks. The Ruin shop felt like a lost brother had somehow connected with us via some strange cosmic telepathy type magic cause when Kevin offered his services and selection of videos, we were hours deep in phone conversations and drooling all over the catalogs. Overboard was one of the best things to ever happen to the shop in those days. The fact that we had somehow stumbled upon a treasure trove of skate nerd-isms, we felt that we had to keep it quiet. We didn't want anyone else to really know how rad this stuff was and how we were getting it, but honestly in an era and area obsessed with attracting beginner skaters, Bam and Booming Huck Jams, most shops weren't paying attention to off the radar stuff anyways.

....I dunno what happened to Overboard. My assumptions that internet killed the full length may or may not be correct. Who knows. Did/does it matter. We're here now. And then this Look Back Library thing starts building and "shit, man. It's Kevin from Overboard!" Social media following and just general stoke of what he's doing and how he's doing it. Instead of vids, it's mags and what's better than magazines? Nothing!
.
.Kevin asked to do a show at Ruin showcasing Atlanta based covers, publications, zines, etc...
It's April 22 at Ruin Shop. 7-10pm. If you're a nerd about who, what, when, where and why, this is gonna be your type of nerd shit.
Hit up the shop for some more info..
404.943.1178