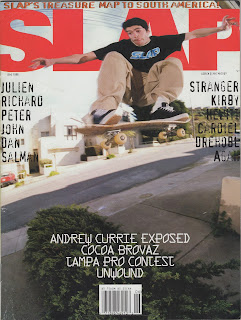 This was one of the Slap covers that have stuck with me through the years. I met AJ at Woodward after this came out. I think we were working in the kitchen together for the week. The cover topic never came up, but it was so rad being around him. He was full on Jah-Rah shit: only reggae, weed and would like just bomb the hills there or something. Philly/Athens, it was like the same vibe back then. Was an awesome thing to be around. As you can see the two connecting points in the Satori vid, here.