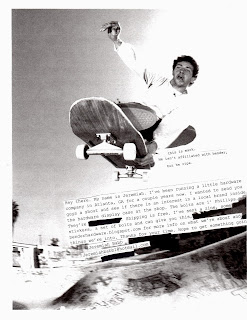 .....I get it. Bolts/hardware, that shit ain't exciting. Why do you need other bolts in the shop? Who really gives a fuck what you put on your board as long as the things don't break or fall off? I went into it because it was cheap, it didn't require as much time as what doing other skate product does and I could hook up dudes I like. Those are supposedly the upsides. The downsides are the same.
......But really, I wanna make the shit good. I want to do more than I've been doing with it. I want to get more shops involved. I'd like to make 5 new shirts every year. Some hats. Sweatshirts. Griptape. Rip Grip. the little pieces of plastic that you put on the front of your truck's baseplate in '92 that was suppose to make you slide better and get into the noseslide-Kgrind-SS 5-o things easier. All that stuff that isn't necessary.
.....Well, the funds are limited. Very limited. And the classes that taught computer skills were ignored in high school. As well as most English classes, Economics 101, and I obviously thought a Business degree was bullshit when the idea of college floated through my head as I sweated and froze in the middle of Georgia constructing residential homes after highschool. "Fuck that shit dude. I'm a be okay."
....And I will. I'll plug away and make do with what I got and the ability to create things using the knowledge I have. This may look like some hip version or "going for that D.I.Y look, huh?" kinda thing. But it isn't. I'm trying to spread the word of Bender to more shops. I could E-mail "blast". Cold call. Facebook post. Instagram shit to death. Or either create something, put it in the mail and drop it off at the Post Office. I do the latter because it feels right and seems better. It seems real and I hope that if shops get this, they can look at it, and after trashing it in front of others, will say.."Damn. At least dude tried...."