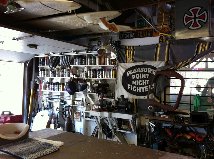 ...Old friend of ours, Eric Shoemaker, moved to SF some years back. Every so often I'll hear from him. I think this time he was bragging....but hell. I would too....
...."So as it turns out, a co-worker of mine's neighbor is Jim Phillips down in Santa Cruz. We got to go today to his house and check out his studio space. It was pretty amazing talking to someone that was such a big part of skateboarding history." 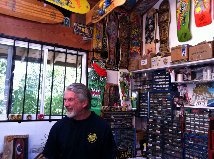