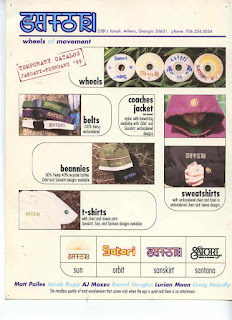 ...Satori Wheels have always had a place in my soul of skateboarding. Traveling to Athens, Ga, in their skate scene days of glory, always found me around Ampt Skateshop and the guys who eventually became the founders of Satori Wheels. I was a young country kid to them, but I would try to hang with them as I followed their 60mm fueled hill bombs and grass rides. There were massive learning and life expierences encountered during those days. Although I never had the "hippy" vibe that crew had, I still felt like we related because of the stoke of skating and pushing through campus and the town. They were adament about not driving to spots. So if everyone wanted to skate the spot on the other side of town, they just started pushing. It was pretty rad that getting to the spot was as much fun as skating the spot..... 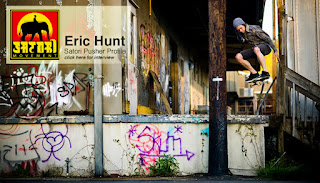 .....jump 15+ years ahead and after having a good run of skating for them and travelling with the Satori dudes. My good friend Eric Hunt from Asheville, NC is now riding for them. I've known Eric for many years now as well and although I may never return his phone calls or make valiant efforts to meet up when he's in town. He has always been one of my favs to see on a skateboard. Quick footed, low center of gravity, precise flips, rad flow and smooth. It fully fits the Satori gig and surely has a spot on Bender. Here's an interview thing from the Satori site where he talks about mountain life, skateboarding and the Push Shop. One of the raddest towns out there is Asheville, NC. Make a trip!
Posted by Jeremiah Babb at 9:57 AM