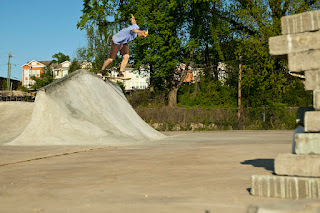 ...I've known Chris for what seems like forever. I met him when I was 14 and he was 16, I believe. He had a piece of shit car and would sometimes come out to the woods and pick me up for skate sesh's if I annoyed him enough during the week. He's someone I've always looked up to and went to for advice with life shit, skate stuff and dumb stuff. He's really been like a big brother to me. We're peers but he's always got my back and has always looked out for me. Almost 20 years of friendship. Damn. That's crazy. Here's a couple of questions I asked him for this lil blog post. Morico shot the flicks of course. 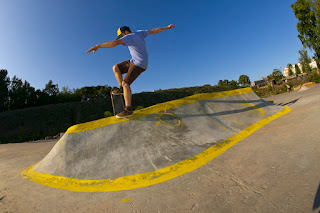 ......You were the first dude to start doing d.i.y. stuff on empty public spaces in Atlanta that most can remember. (40 yard/late 90's) What was the drive to build that stuff without the proper tools, water supplies or experience working with concrete? And what tools did you use doing it? I remember trashcans being mixers. hauling 5 gallons buckets of water from the cheetah. And smoothing the 'crete by hand....

My friend Tyler Klein was really inspired by what was going on at burnside. One night while we were skating downtown he and I found a pallet of cement. I think that he suggested building at the 40 yard. We started mounding dirt and laying cement. We threw it together in one night. It lasted for one session because it was made of masonry cement - which is the wrong stuff. This was before it became common to use google, so we did not even do any research. We just did it - and it sucked. Something about it grabbed me. From that point I started spending a lot of my time at the 40 yard. I think the only tools I had was a shovel, a plastic trashcan and a trowel. A lot of trial and error and a whole lot of grueling manual labor. I saw a bunch of crazy things down there and I learned a lot about people during that time.
.....From high school to U.G.A to Ga. State to Ga College to high school teacher back to West Ga. and now you're looking at more schooling. Where's the end of that road? Are you ever gonna get out of the school system?...
I don't know. At the end of this year I should have a BA in History, a Master's in Education and a Master's in Psychology. It seems like I am set up to get a PhD in Psychology. I may do that. Right now, my plan is just to take whatever path seems best.
.....A couple years ago, I skated with you for what you thought was your last session. You had that double ankle rebuilding surgery coming up that month. Where the Dr.'s said that you'd probably never be able to skate, run or be physically active the way you once were. What was the rehabilitation schedule of that? With all the injuries I've seen you go through and that crazy surgery, how are you skating better than you have in years?...in your 30's? Where's the fountain of youth that you've found?
Basically, I thought I would never be able to be active and then I found out I would be able to skate again. So, I had a year of not being able to skate after thinking I was done. The whole experience made me realize how important skating is to me and got me really excited about coming back. I started working out my ankles as much as I could - walking, running, biking, hiking, yoga, etc. Now I am skating and I am really appreciative.
......When I say regular frontside 180 ollie to switch frontside 5-0 grinds to fakie roll away, what do you think?
A blessing and a curse.

Posted by Jeremiah Babb at 9:32 AM