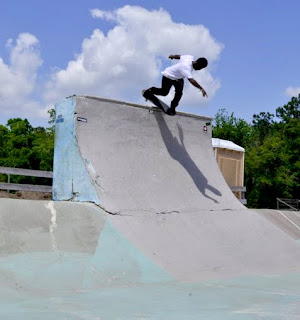 ...I looked for photos of Reggie. Couldn't find many in the Google search. I stole this one because most of them were of some big football player. Which is weird because I started to think that since Reggie is built like a football player, maybe he's doing the old double life...
... It's true I don't know a whole lot about young Reggie here. I met him less than a year ago. Talked to him a few times on the phone. Skated with him a few times. But not much more. These are things I know about him. He either just did or is going to soon graduate highschool. He's either 15, 16, or 17. He may have a full beard. He looks like he drinks muscle milk. He seems to ride the fuck out of a skateboard. I heard he always has his Ipod in, even when his skating with friends. (weird) He either has a warped, dry sense of humor or actually doesn't know the answer to some of the questions he asks. He can take a beating when skating, I think. Rides either 7 ply or 8 ply boards. We either are friends or he's just acting like it. And I think I've been pretty hyped on this dude since the first time I saw him skating at the Columbus park....but I can't be sure.

Posted by Jeremiah Babb at 6:07 PM