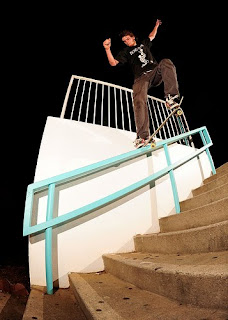 ....he can ride a skateboard backwards and crooked down handrails that are beside walls, but that's not the point of this...the point is how, I used to grip Ben's boards back when he was a wee boy coming in to Ruin and annoying the shit out of me with a barrage of skateboard questions that I didn't care about. Or more annoying was looking at his blank stare's and giving me the "uuhhh, I dunno. I don't have any money" when I asked if he wanted to check something out. That went on for years. Years!! He wouldn't speak. Drove me nuts. Then I remember the crazy dreads he grew. I was just "What the fuck?" when i saw those things stroll into the store. I didn't see him for a few years and randomly ran into him skating. I instantly remembered him and was struck on how good he was. A couple years after that I skate with him and I'm blown the fuck away by his gig. No real sponsors to speak of. works 30 hours a week. Skates all day and night. And lives life pretty sick. We got him on Ruin obviously, it was a given. He bought his first boards from there. And he's filming for the Ruin vid. I'm hearing stuff he's doing that is just face melting. He rips. He does it for the right reasons. And he loves it. Go ahead and get acquainted with his style. He'll be around town for awhile.

Posted by Jeremiah Babb at 5:20 PM